North Carolina is on the front lines of 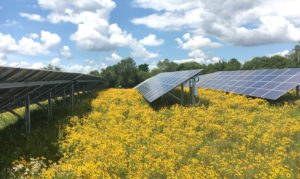 climate change, managing through hurricane seasons with increasingly frequent and intense storms and battling health and economic impacts from other extreme weather events - intense heat, drought and heavy rainfall. In the last few years, local governments across the state have taken on the task of reducing their local impact by setting carbon emission reduction and renewable energy goals. Today, several of those cities, towns and counties are taking that task one step further by formally weighing in on Duke Energy’s long range power plans, called Integrated Resource Plans (IRPs).

North Carolina’s local governments all feel the impacts of climate change in unique ways. “Regardless of the varying symptoms,” said Meg Jamison, Network Director for the Southeast Sustainability Directors Network, “there’s common ground and a growing sense of urgency in the cause we’re battling: a changing climate, worsening by the day due to continued reliance on fossil fuels in our energy and transportation sectors.”

While work advances at the state and federal levels to tackle climate change - including efforts led by the NC Dept. of Environmental Quality (NC DEQ) and NC Gov. Roy Cooper on a Clean Energy Plan to reduce carbon emissions from power plants - local governments are stepping up to do their part for the transition to a clean energy future.

Cities, towns and counties are significant users of the state’s power supply, both because of the amount of energy consumed in local municipal facilities and because of the energy consumed by businesses and residents at-large. “There is growing recognition that the stakeholder and environmental stewardship role local governments play constitutes an opportunity to be an active part of the conversation around how North Carolina’s power is generated,” added Jamison. “There’s only so much stakeholders can do once utilities’ energy plans are set. To make a difference, you need a seat at the table when the plan is being developed.”

The NC Utilities Commission (NCUC) requires utilities to file a long range energy plan, called an Integrated Resource Plan (IRP) every two years. In these plans, utilities map out the mix of coal, gas, nuclear, renewable energy, energy storage and energy efficiency they’ll leverage to meet energy needs over the next 15 years. Duke Energy filed their plan with the NCUC in October 2020, and the NCUC is accepting stakeholder comments on that plan in advance of a public hearing on March 16.

Three local governments - The City of Asheville, Buncombe County, and the City of Charlotte - have chosen to formally intervene in Duke’s IRP. Several other North Carolina cities, towns and counties have provided input by signing onto a joint letter; the City of Raleigh and Town of Cary also submitted individual letters to the NCUC.

In the same way many local governments have developed carbon reduction goals, Duke Energy has also announced a plan to achieve net zero carbon emissions by 2050. “These shared goals provide the foundation for local governments to continue to work with Duke Energy to make energy choices that meet the needs of the utility, stakeholders and customers, while reducing harmful impacts of energy pollution on our environment,” said Jamison.

SSDN is proud of the active role NC local governments are undertaking to create the clean energy future that’s best for their municipalities and the residents who live and work there.

“The power of our collective voices can advance North Carolina toward a cleaner, more sustainable energy future that decreases carbon emissions, improves the health of North Carolinians, and ultimately lowers energy costs for everyone,” said Jamison.

SSDN is proud of the increased level of engagement and collaboration that these 15 local governments -- in all regions of North Carolina -- are undertaking to create the clean energy future that’s best for their municipalities and the residents who live and work there.

Read our latest stories on sustainability in the Southeast.